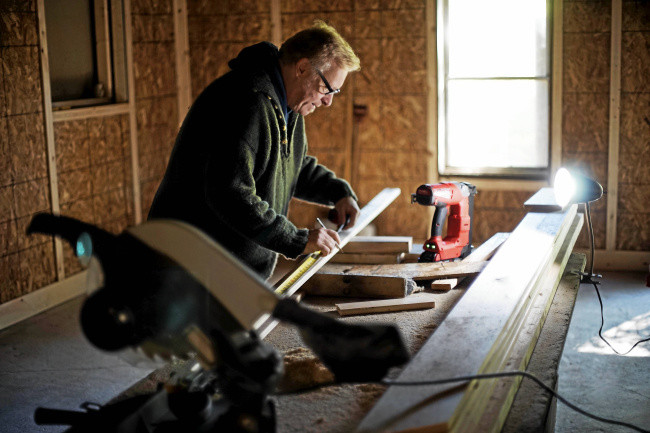 SHEFFIELD — One of the most popular shows on public television will be broadcasting from a location on South Main Street next season.

“The Garage with Steve Butler,” is a public access television show about building furniture and other items without spending a lot of money on high-tech tools.

As it says on Butler’s website, thegaragewithstevebutler.com, “You don’t need all the bells and whistles to make quality pieces. Steve doesn’t.”

According to Butler, “The Garage With Steve Butler” began about five years ago. He was watching a late-night infomercial about how to host your own cable-access show.

At the time, Butler said, he was laid off from his teaching job, “and stressing out how to make money.” Butler, 54, a native of Toronto, was laid off in 2009 as a woodworking teacher at the Peters Valley Craft Center in New Jersey. Prior to that job, he had worked in a similar position in the Worcester area.

Following his layoff, he and his family moved back to Massachusetts, where he began shooting the initial episodes of “Garage” out of, well, his garage in Uxbridge.

The simple premise of the show, especially Butler’s emphasis on working in a confined space with limited tools, has taken off. He has demonstrated how to make everything from fine furniture to a guitar out of a cigar box.

“I think when people think of woodworking shows, they expect you to be working out of a renovated mill building,” said Butler. “But a lot of people don’t have the resources to do that, and to spend a lot of money on expensive building equipment. I think the show has found it’s own niche.”

Presently, said Butler, a total of 567 public access stations carry the show, including stations in South Africa, New Zealand and Canada, as well as stations as far away as Hawaii.

Locally, the show will be a part of PBS programming next season from channels out of both Albany, N.Y. and Springfield, according to Butler.

Readers can access back episodes by going on YouTube or by going to www.pegmedia.org and searching for “The Garage With Steve Butler.”

Butler and his family moved to Sheffield several months ago to be closer to his wife’s family.

“We’ve visited the Berkshires often,” he said. “We love it. We’ve always wanted to live here.”

Butler leased an old barn and began renovating it five weeks ago. He expects to begin shooting new episodes in the spring.

“We have a crew of two people, with two cameras, including one fixed camera,” he explained. “It’s pretty low tech. It’s kind of like a cooking show. You’re focused on just one thing.”