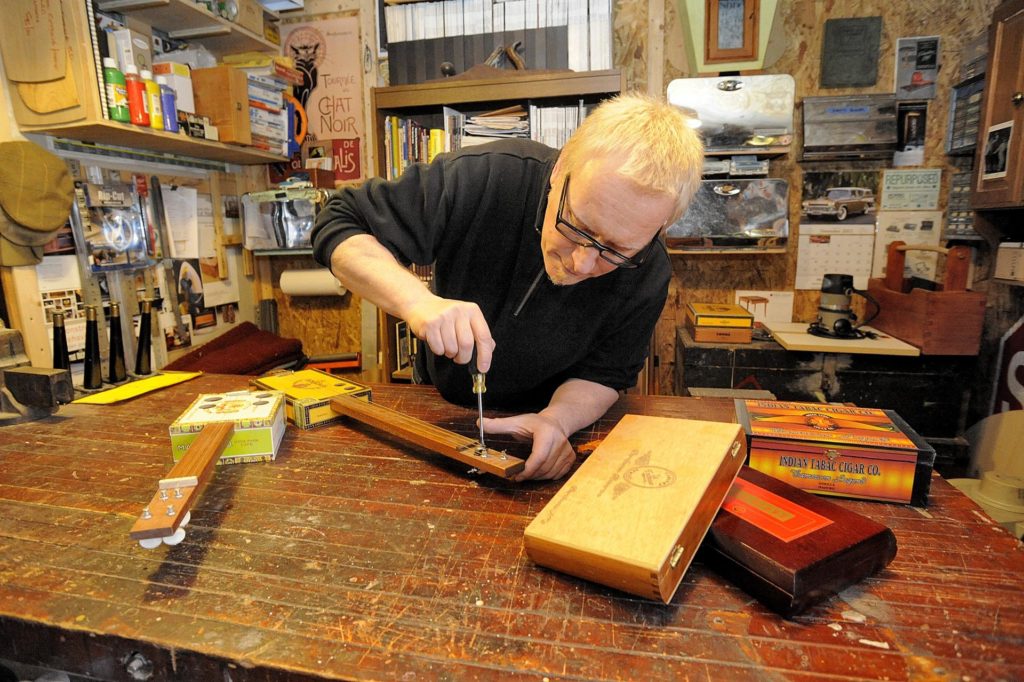 UXBRIDGE — When you are in the garage with Steve Butler, there is very little room for you to move without bumping into a table saw or conking your head on the cannibalized remains of a chair dangling from the rail of an automatic garage door opener.

Yet he regularly invites people into his 15-foot-by-25-foot garage by the hundreds — if not thousands — from his neighbors in Uxbridge and Whitinsville to strangers in Alaska and New Zealand.

Mr. Butler has turned the one-car garage attached to his North Main Street home into a television studio, where he films the process of making the functional funky: Bread boxes become tables; cigar boxes become guitars. Guided by Mr. Butler, they are projects that anyone can do with a few materials, a little courage and a local cable television station that broadcasts his show, “The Garage with Steve Butler.”

The show is aired on local cable access channels in Northbridge and Uxbridge, and on more that 380 other stations in 45 states and in Canada that have accepted his mailed DVDs as part of their regular programming or downloaded from the public, education and government community television transfer site, PEGmedia.org.

The set is meager; the film equipment is borrowed, and the fan base is growing.

The garage is decorated with vinyl records and album covers featuring Aretha Franklin, the Beatles and Ray Charles screwed to the garage door and walls, as well as streets and postcards from art shows where his work has been exhibited.

The confined space requires some creativity. Jeff Ellis of Whitinsville films the show and is often straddling a stair railing or standing on a work bench to get the right angle; the insulation is scorched where it almost caught fire from a halogen light that was too hot and too close. 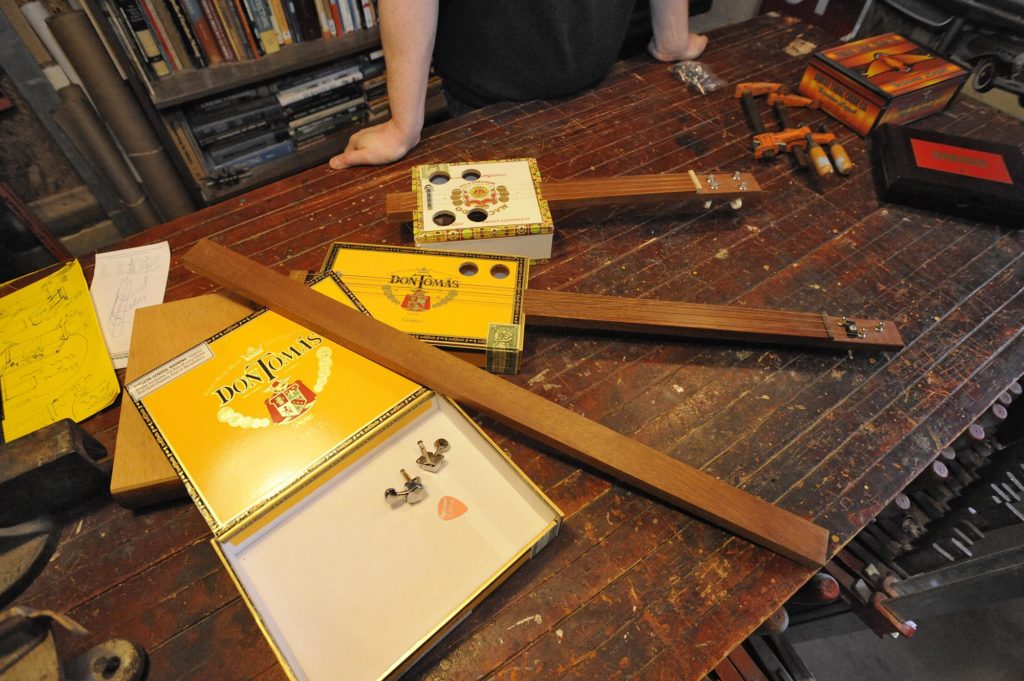 “We’re riggin’ it up like MacGyver in here,” Mr. Butler said

Mr. Butler is an artist, furniture and crafts instructor by trade. He has an affinity of the mid-century modern aesthetic, a passion for bread boxes and a love of jazz music and the beatnik vibe.

But after his employment as department head of the wood studio of the Peters Valley Craft Center in New Jersey ended three years ago, he moved back to Massachusetts. He tried with two other local residents to create the Blackstone Valley School of Crafts, but the school never found the necessary support it needed to get off the ground. Mr. Butler was a man of talent, but an unemployed creator of objects.

Necessity became the mother of invention.

One night, unable to sleep, he was watching local cable access television and saw an ad looking for people who wanted to make their own television show. He had the idea that combined the two things he loved — making things and teaching people how to make things. He had projects already sketched out in volumes of sketch books; he just didn’t have any experience in filming and video production.

He attempted to film himself, hoping to generate a commission or two while showing people how to lose their inhibitions and be creative.

Mr. Butler took his idea to Northbridge TV, and was introduced to Mr. Ellis. Mr. Ellis films and edits the show, which is now produced by his employer, Hopedale Cable Access. Together, they have created a show of quality that you wouldn’t expect to find on a local cable access channel, but on one of those do-it-yourself cooking or home improvement channels.

“This is all new to me,” Mr. Butler said of his latest venture. “I am just a guy who likes to make things.”

Mr. Butler sees life in things cast aside by others as no longer useful, finding many of his materials at thrift shops, in flea markets, and on the roadside.

The projects for his show are all original.

“These were all in my sketchbook that I was going to do regardless,” Mr. Butler said, adding that he often works with jazz, surf music or any other kind of hip music in the background. “I have enough stuff written down to keep filming for five years.”

The show is their passion, and it is a labor of love. Despite their national and international viewership, Mr. Ellis and Mr. Butler don’t make any money on their show, and each episode costs about $500 to make, counting the cost of materials; the fee they pay each time an episode is downloaded from the media transfer site and the cost of shipping DVDs to cable outlets that can’t pull from the website. The rules of local access cable don’t allow the show to have any sponsors, but the duo is hoping to find a silent partner or benefactor or maybe even catch the attention of a network, or at the very least receive donated materials.

“Success has been a double-edge sword,” Mr. Ellis said. “We have a lot of viewers, but we have to pick up the tab. We are a victim of our own success.”

They aim for an episode every two months, and have filmed 11 to date, with another in the process of being edited.

It takes two days to film an episode, as they film in opportunistic moments: between the demands of their professional and family lives, the traffic on North Main Street — the sound of which is to be considered since the garage is not soundproof; and the weather — in the summer it is warm enough to generate unbecoming sweat, and in the winter, it is hard to edit out puffs of white breath.

Yet despite the challenges, they have not just created a television show and a friendship, but a community around the show that includes do-it-yourselfers, fledgling artists and rockabilly and blue-grass musician following

“These are things that aren’t hard,” Mr. Ellis said. “You just have to be brave.”

The show is available on most cable access channels in Massachusetts. For more information and a list of channels offering the show, visit www.thegaragewithstevebutler.com