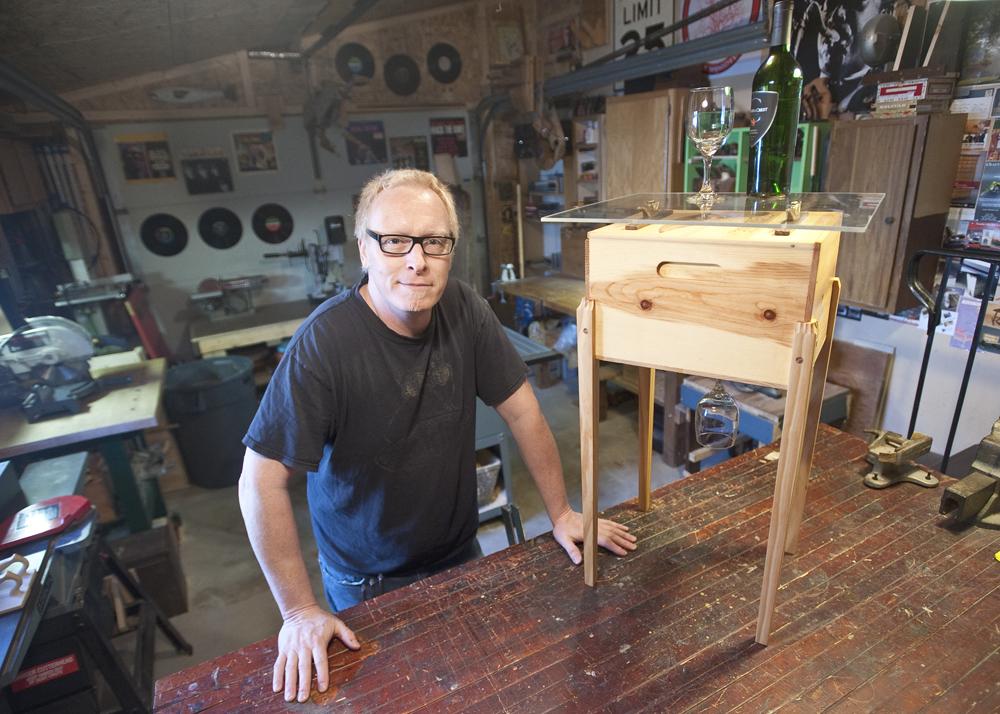 Steve Butler, 51, a native of Toronto, Canada, works out of his garage. Now a resident of Uxbridge, Butler is a furniture maker and as of late, a television show host for “The Garage with Steve Butler.” The show’s purpose is to teach its audience how to build traditional furniture and objects without having all the best tools.

Butler graduated from art school, worked as an industrial arts teacher, a woodworking department head at the Worcester Center for Crafts, then at The Peters Valley Craft Center in New Jersey. In 2009 he lost his job in New Jersey due to budget cuts and moved back to Massachusetts, leading him to where he is now: in the garage.

You’re an artist and furniture maker; what’s your specialty?

I refer to myself as a tinker. Furniture is my specialty but I’m just as happy making my picnic table as I am to fine contemporary furniture. Now, I would maybe take out the fine word. I just like tinkering, just like playing, making tables out of breadboxes or making classic furniture, as well. I have to do it. I get the hebe jebes if I don’t.

Tell us about your workshop.

My workshop is my single car garage attached to the house in Uxbridge. I used to, being a department head with the Craft Center, have great access to a great facility. A lot of the emphasis on my work was on design then and not the process. When I moved to Peters Valley Craft Center, they were out in the middle of nowhere. They don’t own the building so it was hard for them to get a lot of funding for new equipment. I walked into the wood studio; it was crude, bare bones. For the first six months I hardly made any work; I was used to having access to any tool or facility that I needed and then I didn’t. So I started to see my work in a different way and started doing almost the equivalent [to] dumpster diving for reclaimed furniture, it was more enjoyable. My space, from moving and losing a job had gotten smaller and smaller. It’s also gotten more conducive to the work I do now, in a weird way.

You’ve been a furniture maker for 20 years, how did you transition into TV host?

I never set out to be a TV host. I was sitting up late when we first moved, I couldn’t sleep because I needed a job, life worries sort of thing. When we have moved to a new place in the past I would pick up the local paper, watch the local channel to help settle into the area, see what’s out there. I saw an ad, create your own TV show, I think it was channel 11 Northbridge that I was watching at that time. I’m making all these things in my sketchbook, because I have to. So I thought, well I’ll set up a camera. I had visions of a little camera on the bench while I’m working with the hopes that maybe someone watching will want to commission me to make their bookcases or something like that. Through my work as department head at the craft schools I was also teaching, so explaining my work or the process was pretty natural. In fact, I probably over-explained. Now we edit and just get to the point. The feedback has been great, you make people feel like anybody can do it, and that’s the premise.

Tell us about your show.

It’s a woodworking show called “The Garage with Steve Butler” because it’s filmed out of my garage. I was a little concerned it would sound too gear-head, no offense, you know a mechanic type thing, but it’s more the space, the garage. The shop is bare bones, like a lot of the viewer’s workshops. I don’t have all the bells and whistles, yet I demonstrate that you can make quality work, or just be creative. For someone who’s just getting into woodworking and doesn’t know what a router costs, they see this big intimidating piece, it’s expensive, and so they don’t try. We want them to try.

Where do you find inspiration for the show’s themes?

I have enough sketches in my sketchbook from art school and from just life that we could probably film for 10 years. It’s always there. A musician is always writing lyrics, a poet is writing poems, an artist draws pictures. Not all of them would be conducive for the show; they might be too long or to complicated.

How many episodes have you made? What’s been your most memorable?

We have 11 to date. We have a lost episode, the very first one… or the second one. The first one was the bread side table. We try to have a funky one then a traditional one to appease everyone. Guys who really enjoy the technical aspects of woodworking and people who like to do a little more funky stuff with repurposed materials. The second episode was complicated; it had tapered joints and inlays. We were both new at it; I was probably over-explaining. We had so much footage, it would have taken Jeff about three years to edit. It took about a week to shoot, where now it takes about two days. So we just lost that. True story, cost us a week of our time. That was the learning curve right there.

Who is your audience?

We’ve been getting emails and feedback from traditional to the hardcore tool-drool guys. I’ve had people come up to me in town and say, ‘you make it seem like anybody can do it.’ I had an old guy from North Carolina just recently email me about the episode where we made a cigar box guitar. He informed me that I wasn’t much of a blues guitar player but the show was really good. He kept me grounded. He was from Darby, North Carolina. I’ve had a person from Australia email. It’s been widespread and pretty cool.

What do you need to know to produce your own show?

Jeff Ellis produces the show, he works at Hopedale Cable Access. He hadn’t really produced anything before we started. He brought a camera over and filmed me making a breadbox table. The first episodes are crude for both of us but it’s been a great learning curve. We started using multiple cameras. I would be talking and it’s the side of my head or I’m looking at the wrong camera. Where the hell do you want me to look? The show has come together since then and it looks nice and tidy, it’s worked out. I think that’s why it appeals to people because it is genuine. We have incorporated questions into the later episodes. Jeff would ask me questions just like this. We now have a template where in the beginning we didn’t. We now have an interview and the snippets run through the show. It might be about my process, it might be about an ascetic. What is mid-century modern? We have a ton of out-takes too. I tend to curse and do a lot of things on camera that you’re not supposed to do; Jeff likes to sneak them in.

Do you market the program? Have you made any money?

Not really because it’s on cable access. You’re not allowed to solicit any product or sell anything even if you have a website. I do have a donate button because it costs about $500 each episode. The materials, the DVDs. There are 75 stations that don’t have that computer technology to download from media sharing sites. We market in a sense, the way I got it out to so many stations, I Googled them. That’s it, networking through the Internet. It’s a lost leader right now.

How many stations carry “The Garage with Steve Butler”?

We’re on about 380 stations right now. We’re in Anchorage, Alaska, we’re in two places in Hawaii, we’re in New Zealand, we’re almost in Europe on Sky Network, we just don’t have the technology right now to format it to their conversion thing.

Where do you see your show in five years?

Hopefully making some money, that sounds really greedy. I used to be a musician, I never aspired to be rich and famous, as long as I could live, doing my craft. That’s what I’d like to do. I’d like to give Jeff and myself a salary so we could do this full time. That would be great.